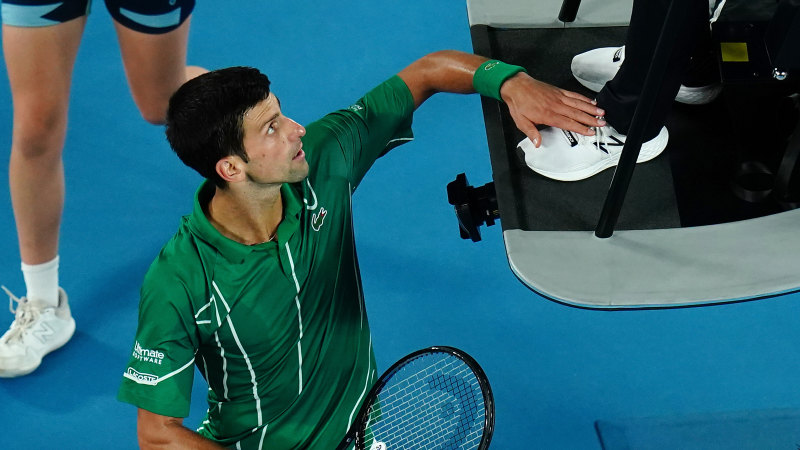 “In a professional sport, things happen that you’re not proud of and sometimes you do things you’re not happy with and you go through different emotions, you go through ups and downs,” Djokovic said. “Of course, I’m not happy I touched the chair umpire. I’m sorry if I offended him or anyone else, but in the heat of a battle, some decisions that he makes or something that happens distracts you and sets you off the balance a little bit, and I just tried to rebalance myself and it all ended up well for me.”

So what if Dumusois had been in a less forgiving mood? And what would have happened if tennis had adopted the far more hard-line policies of other sports, which often provide zero tolerance when it comes to manhandling officials.

NBA players operate under the ‘Respect for the Game’ rules, which provide a guideline for both athletes and officials when it comes to some of the more heated moments. Players can express their disagreement with a call in a respectful manner provided it doesn’t include profanities or be done in an aggressive manner.

What they can’t do is lay their hands on officials, which players continue to learn the hard way. Last month, Washington Wizards guard Isaiah Thomas was ejected almost instantly when he touched an official, who was pushed back into the crowd.

Thomas’ claims that he was pushed himself and then bumped the referee didn’t wash and he was back in the locker room less than two minutes into the game. You don’t get a warning when it’s perceived to be that blatant.

The AFL has fines and suspensions in place for players that make contact with umpires and has dished them out over recent seasons, with Geelong’s Tom Hawkins among those to spend time on the sidelines for contact with officials. The NRL tightened its rules in 2016 after a series of incidents, with a number of players suspended including Tyson Frizell, while Josh McGuire (playing for Brisbane) copped a fine in 2018 for a similar incident.

The sight of a mob of angry players descending on a referee, often after a penalty call or booking, isn’t particularly unusual in football. But should players take it too far, they are likely to see a red card and a suspension.

Only last week Gelson Martins, who plays for Monaco in the French first league, pushed referee Mikael Lesage twice after being shown a red card. He faces a ban of up to six months.

Even the greatest aren’t immune to bouts of temper tantrums. In 2017, Real Madrid’s Cristiano Ronaldo was banned for five games after he pushed a referee in the back following a red card.