A man’s body has been found in bushland on the NSW South Coast with police wanting to speak with anyone who saw a purple car in the area.

The body was discovered in Broulee on Sunday afternoon by a man who was walking his dog, police said in a statement on Monday. 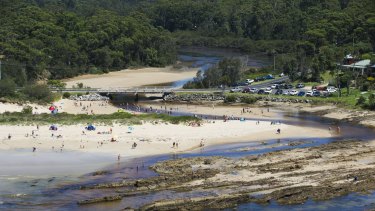 Emergency services were called to the beachside town of Broulee on the NSW South Coast, where a crime scene was established.Credit:Rohan Thomson

The dead man, aged between 45 and 55, was wearing a blue singlet, blue jeans and white runners.

The death is being treated as suspicious and investigators have appealed for anyone with information to come forward.

Detectives want to speak with anyone who saw a purple Honda Jazz in Broulee or Batemans Bay since Friday.