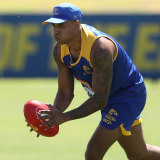 Tim Kelly reported to training early to get comfortable with his new surrounds at West Coast.Credit:Getty Images

But Sheed is well aware the arrival of Kelly will put extra pressure on midfield spots, and he’s been working hard on his forward craft to ensure he isn’t the one to get left out.

“We’ve got a lot of elite midfielders in our group and only so many can fit in,” Sheed said.

“So to be able to either go back or forward as a midfielder helps you at selection time. Every mid these days needs to have another string to their bow.”

Sheed kicked a career-high 16 goals last year to go with his 26.5 possessions per game, but he’s not resting on his laurels.

The 24-year-old has been impressed by what he’s seen from Kelly on the training track, and he can’t wait to see the star midfielder in games.

“He definitely adds a different dynamic to our midfield that we needed,” Sheed said.

“We’ve got the likes of Shuey and Yeo who are our bulls and explosive inside. Then you’ve got Tim Kelly who’s that crafty smart midfielder who can sneak forward.”

West Coast’s premiership defence was ended by Geelong in a semi-final last year.

Eagles players are determined to make up for that early exit.

“We’ve probably got something to prove. We feel like we’re better than what we produced last year,” Sheed said.

Star defenders Jeremy McGovern and Tom Barrass are still working their way back to full fitness following foot injuries, while Willie Rioli is expected to miss the entire season while he waits his ASADA fate.

But spearhead Josh Kennedy is enjoying one of his best pre-seasons in years, fuelling hopes the veteran can turn back the clock in 2020.

Next Post
Adani gave $200,000 to Coalition weeks after securing approvals