Rachael Nolan, a lecturer in fire ecology at Western Sydney University, said the challenge was to ensure historic data from public and private lands was comparable to current mapping. That said, it appears the NSW fires were “definitely much more than than we have seen before”.

A spokesman for Victoria’s State Control Centre that fires in that state have charred some 1.5 million hectares this season, with seven “significant” fires still burning. That tally for now trails the 1.6 million hectares burnt in 2002-03 and the estimated 3.4 million hectares scorched during the 1938-39 season, including the Black Friday Fires.

Among the utilities affected by the fires included 60 Telstra mobile sites across NSW and Victoria at the peak of the blazes.

“The majority of those impacts were power-related but five were damaged by fire and need quite extensive repair work,” a Telstra spokesman said. “In just a week we managed to bring the number of impacted mobile sites down to 15.”

Among electricity suppliers in NSW, Endeavour Energy had the largest impacts, with some 54,000 customers losing power because of the fire since November alone.

Residents in Yatte Yattah, a village in the Shoalhaven, endured the longest outages, with some 200 people without power for 10 days after fires converged on three sides, an Endeavour Energy spokeswoman said.

Fires burnt across 1.16 million hectares – or 45 per cent – of the utility’s coverage area. Work crews toiled through the summer to replace some 700 power poles alone, and install 95 generators to give as many as 900 customers as much as two weeks’ continuous power. 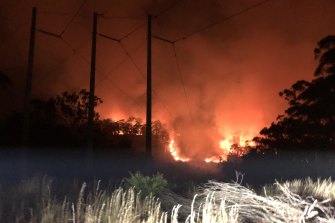 A large fire burning under powerlines near Batemans Bay in early January.Credit:Peter Hannam

The widespread fires have also required hundreds of staff to work to reopen long stretches of roads and even railways affected directly by damage to equipment or the threat of falling trees.

“The priority areas continue to be the South Coast, Snowy Mountains and Monaro, East Riverina and Southern Highlands with a number of fires still active,” she said.

The Kings Highway connecting Canberra to the coast was among the hardest hit, requiring as many as 70 workers a day to reopen a route closed for about six week.

Crews removed about 1200 hazardous trees along a 43-kilometre section of highway and repaired some 43 damaged guard rails.

Similarly, fires closed as much as 400 kilometres of the Princes Highway, with about 1500 trees damaged along the highway between Nowra and the Victorian border. They also destroyed more than 320 road signs.

Blazes also affected 25 kilometres of rail line in both directions in the Blue Mountains from Mount Victoria to Lithgow, including damage to signalling infrastructure.

Peter Hannam writes on environment issues for The Sydney Morning Herald and The Age.