Queensland politicians returning to Parliament on Tuesday were met with loudhailers and banners as a climate activist group vowed to make the first sitting day as “chaotic as possible”.

A number of the protesters blocked entry to the building just after 9am, chaining or gluing themselves to gates and road access points. 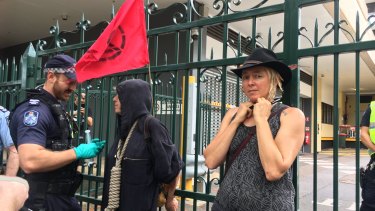 A group of about 150 climate activists gathered outside Queensland Parliament vowing to disrupt the first sitting day of 2020.Credit:Lydia Lynch

About 150 people gathered at Speakers Corner for the protest, led by Extinction Rebellion, in an effort to draw attention to financial links between fossil fuel interests and major political parties.

The group gathered about 8am before marching down George Street to 1 William about 30 minutes later to carry out “acts of civil disobedience” after a number of people spoke.