Qantas flight arrives in WA after six-hour delay in Wuhan

WA Health Minister Roger Cook said it would likely take considerable time for the passengers to be assessed once they landed at Learmonth.

“My understanding is the federal government is anticipating that scenario and they have the appropriate accommodation for those patients on the ground,” he told reporters in Perth.

Foreign Minister Marise Payne said 89 of the passengers were aged under 16, including five under two. Senator Payne said the delay was caused by extensive medical and immigration checks for those travelling.

“We have prioritised vulnerable and isolated Australians,” she said.

The Qantas flight also delivered medical protection supplies including masks, protective suits, goggles and gloves to China. The mainland has been battling healthcare shortages as the number of confirmed cases of the flu-like disease swells to 17,318, with 362 deaths.

Australians still trapped in Hubei province are expecting a second flight to arrive within days to take them out of Wuhan.

Three Australians, Emily, Allison, and Moko Yong said they have begun preparing to travel to the evacuation point at Wuhan airport. The journey has been made more complicated by a total shutdown of public and private transport across a dozen cities in the province, which is home to more than 50 million people. 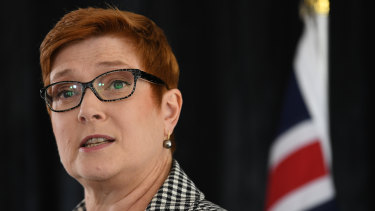 Foreign Minister Marise Payne is working to get Australian citizens out of Wuhan.Credit:AAP

Australian evacuees will have to show identifiication and a note from the Department of Foreign Affairs in order to pass through road blocks.

Allison, who asked to be identified only by her first name, said that when the first evacuation was announced she did not want to leave.

“The reason I started to hesitate again is that now the Australian government has banned the entry of other visas, which means that many flights will be cancelled, which also means that even if I want to go by myself, there are no flights to take,” she said. “The return seems remote.”

Senator Payne would not guarantee on Monday that a second evacuation flight would proceed.

“We will consider what might be necessary,” she said. “We are pleased we have been able to uplift 243 passengers on this flight and thank the authorities in China.”

Chief Medical Officer Brendan Murphy said once the evacuees arrived on Christmas Island they would be separated into families. If a family-member became ill this could re-start the quarantine clock for those in their group, he said.

“The plan is to cohort people in small family groups so there won’t be a full mingling.

“If someone does get unwell, their family might have to start again for 14 days, but we wouldn’t want to expose the whole group to that.”

On Saturday the Department of Foreign Affairs upgraded the travel advice for all of China to “do not travel” and barred all non-Australian citizens or permanent residents who had travelled to China from entering Australia.

The decision has major implications for the multibillion-dollar university sector, with tens of thousands of international students scheduled to begin their studies within weeks.

Dr Murphy said those who left China for a stopover country would be allowed in once the two-week quarantine period had elapsed.

“So if they went to another country for 14 days, they would be fine to come to Australia if they were well,” he said.

Senator Payne said she had been in discussions with Australia’s Pacific neighbours about evacuating and quarantining some of their citizens trapped in Hubei.

“We are having discussions with countries that have nationals who are stuck,” she said.

“If they came to the Australian mainland, as part of a removal, the expectation would be that they would quarantine also for 14 days and [that] would occur at Christmas Island.”

Eryk Bagshaw is an economics correspondent for The Sydney Morning Herald and The Age, based at Parliament House in Canberra

Next Post
'Everyone likes Australia': Eurovision guru says nation on the brink of a win