As a result more than 1500 shareholders joined a class action against the retailer in 2017, claiming it misled investors by not correcting Mr Brookes’ comment.

In the judgment passed down in October, Justice Beach ruled that while Myer misled shareholders and breached its disclosure obligations on seven different occasions, this did not cause shareholders any financial loss.

This was due to Myer matching its NPAT forecasts against consensus provided by markets data service Bloomberg, which was lower than the guidance provided by Mr Brookes due to analysts’ “scepticism”. Even if Myer had provided disclosure, the share price may not have altered drastically due to the lower expectations from market watchers.

On Monday, barrister for the shareholders Norman O’Bryan, QC, said the expert witness whose testimony Justice Beach referenced when determining any instance of financial loss, should be given the opportunity to assess any loss from November 21 onwards, the first date Myer was found to have breached its continuous disclosure obligations.

Mr O’Bryan argued that if Myer had disclosed to the market on November 21 as it should have done, the disclosure would have seen Bloomberg consensus drop further, a possibility Justice Beach alluded to in his judgment. A drop in consensus could have then influenced the share price.

“Now we have the counterfactual clear, there’s a lot of people in this group who ought to be given a chance to prove loss and damage,” Mr O’Bryan said. 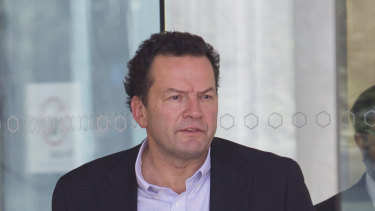 Myer’s legal team, led by Ian Waller, QC, argued providing TPT with another opportunity to give evidence would be akin to getting “second bite of the cherry”, saying the court had already been provided with all the required evidence to deduce investors had not suffered loss and damage.

Mr Waller warned if TPT was granted leave to bring new evidence, Myer could also seek to bring new witnesses, saying it could potentially call on market analysts to provide a “real world” example of how they would adjust their consensus forecasts in that scenario.

Justice Beach set a date in mid-March for TPT to present the nature of the evidence it wished to introduce but did not grant it leave to serve and rely on the evidence, calling it a “half-way house” compromise between the two parties.

Mark Elliott, a former Minter Ellison partner and funder of the class action, told media outside the court that he was unfazed by Myer’s threats to call in analysts to prove its case, saying he would be “pleasantly surprised” if they did.

“We double dare them, and you know how serious double dares are,” he said.

Dominic Powell writes about the retail industry for the Sydney Morning Herald and The Age.

Next Post
'I can't hate him': Mother of three kids killed by alleged drunk driver forgives