Ship shape: Hopes for defence to provide 'stability' for WA where mining can't

Mr Nielsen said the contract meant a solid stream of shipbuilding work for at least a decade, a timeframe that mining could rarely offer.

“What defence programs can provide and this shipbuilding strategy can provide is stability,” he said.

“Having a continuous shipbuilding capability program over many many years, I think that is the key to the success that we have.

“It is forecasted stability, it’s not something where you have to think about where there could be a downturn in two years’ time.

“We are going to build until 2030, that is quite a long time and in the mining industry you may have a vision where it is going but of course it can change any year, as we have experienced.”

While diversifying WA’s economy is an admirable plight, defence work still pales in comparison to the mining sector, which added $103 billion to gross state product in 2018-19. The next biggest sector was business and property services, which added $25.2 billion.

For defence to make a lasting impression in WA it needs to be able to service the rest of the world. 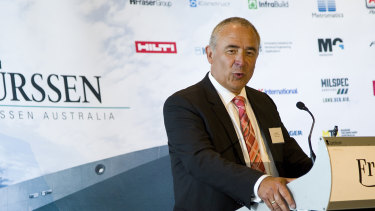 Luerssen’s next-door neighbour in Henderson Austal already exports naval vessels to the world, including the US Navy, and Mr Nielsen said was convinced it could do the same.

“[We are] definitely also looking to export contracts together with Civmec,” he said.

“We are here not just to build this program, we are here for other national programs but also international programs, whatever we are able to win, we want to do. We will, however, concentrate on defence solutions.”

The OPV program is part of a planned $200 billion defence spend over the next decade up for grabs for states who want to host the work.

WA and South Australia are currently locked in a battle over naval work, both eagerly awaiting an announcement on where nearly $8 billion worth of maintenance contracts on Australia’s aging Collins Class submarine fleet will be based.

South Australia argued moving the work, known as full cycle docking, to WA would rip jobs out of Adelaide and cost $650 million.

WA Defence Issues Minister Paul Papalia said the Collins Class was already based in WA and South Australia’s shipbuilding workforce would be under immense pressure as the Hunter Class Frigate and $50 billion Attack Class submarine build programs get under way.

Mr Papalia has overseen an intense lobbying effort to attract federal defence dollars and jobs to WA and said bringing full cycle docking to WA would be like building a new Optus stadium in Perth every two years.

“It is in the national interest that decision happens and we believe that we made the case that it comes to WA,” he said.

Both states have been expecting a decision on full cycle docking imminently, but federal Defence Minister and WA Senator Linda Reynolds said issues relating to the work were “yet to be considered.”